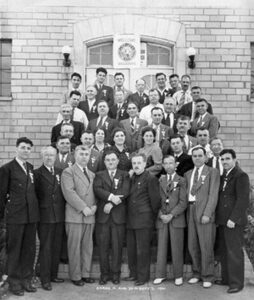 Having been forced out of their motherland Macedonia by the exceedingly harsh new political, cultural, religious and national enslavement initiated by the 1913 Treaty of Bucharest, the freedom fighters of the 1903 Ilinden insurrection turned their sight on the new land of political freedom, of economic opportunity and of basic human rights, which beckoned to them from across the wide expanse of the Atlantic Ocean. They came by the thousands to establish their new homes in the United States of America and Canada.
As the freedom fighters settled into life in these two young, vibrant nations, they looked back on the tragedy of their native Macedonia and decided that it was their inherent duty to keep alive the torch of freedom that they had lighted in the valiant days of Ilinden 1903.
So, in 1922, their delegates met in Fort Wayne, Indiana, and charted a framework within which to build the firm structure of the new organization. At the first Convention considerable attention was given to find an appropriate name for the newly formed organization. The proposal for Macedonian Patriotic Organization was rejected because after the defeat of the Central Powers in the World War I, the word “patriot” had assumed a negative connotation.  The convention settled for the name of Macedonian Political Organization, which, happily, in 1956 was restored to the original proposal – Macedonian Patriotic Organization.
To regulate this structure, guidelines and rules were necessary. These were carefully considered and adopted at this Constituent Convention of the MPO.  Throughout the next several conventions, the delegates diligently worked on improvements and additions to the original bylaws which were adopted in final form in 1927.  The first copy was printed by the Macedonian Tribune office in 1928.  The extensive time and consideration the MPO founders devoted to developing the bylaws resulted in a masterpiece of good statesmanship and political vision.
And the rest is history – documented in the most authentic way, as a vivid testimony of lives, ideals, desires and struggles of Macedonians in North America. Over the last century, the MPO became the only free consciousness of enslaved Macedonia. With its firm and uncompromising stand for a free, independent and united Macedonian state the MPO became a Macedonian legend, second only to IMRO, and the highest symbol of the legal struggle of the Macedonian Liberation movement throughout the world.
MPO approaches the third millennium with even greater enthusiasm than its founders had at the beginning of this century. The century-old struggle has been rewarded with the existence of a free and independent Macedonian state. While the fundamental goals of the Organization, as stated in its original bylaws remain the same, its contemporary purpose is best summarized in our updated mission statement and Bylaws.
For most of our history, the Macedonian Tribune has been our primary voice in achieving this mission. However, with changes in technology, our website, our Facebook page and other social media are utilized to reach an even broader audience.