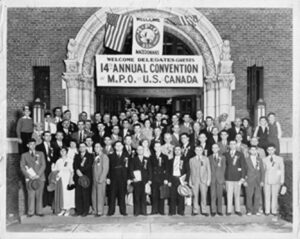 The MPO was founded during the turbulent years following the peace treaties which ended the first world war in 1918. The widely proclaimed 14 points by United States President Woodrow Wilson for national self-determination met with an almost savage rejection by the French, the British and their allies. Once the war was won they had no use for Wilson’s idealism and no serious intentions of establishing a lasting peace in the war-torn continent. The prospect for freedom by many groups such as the Macedonians was dashed. Macedonia was put back under the oppressive regime of the Serbians and the Greeks in spite of the warning by well-known political experts that the unsolved Macedonian problem would keep the Balkans in constant turmoil.
The effect of this decision was devastating for all patriotic Macedono-Bulgarians in the United States and Canada who had spared no effort to demand the creation of a free and independent Macedonia. Their hopes dashed, their spirit suppressed, a dangerous wave of apathy and indifference settled over most of our countrymen, and all attempts to keep the organized groups together and hope for another day met with failure and, in some circles, with unnecessary abuse. Patriots and patriotism became words for ridicule.
The Macedono-Bulgarian National Union, which only a few years before had valiantly struggled in support of the Macedonian cause, abruptly fell apart. This situation added extra fuel to accelerate the general indifference. No formal notice was given and no one knew who took this action and why. The prevailing apathy encouraged the few radical nests in our settlements to start fishing in muddy waters. And there were also individuals who, for some mysterious reasons best known to them, were strenuously opposed to the reorganization of the former groups.
Under the prevailing conditions the prospects for a new organized body to continue the struggle for the freedom of Macedonia were anything but favorable. Ardent participants in the struggle, who a few short years before proudly carried the organization’s banner, now refused to be identified with any patriotic group.  The apathy was deep and widespread.
Fortunately, it did not affect everyone and did not reach some of our oldest settlements. A few of the brotherhoods remained intact. If the heart was not bursting with flaming fire, the sparks were still there and could be ignited at any time.
The appeals for a renewed struggle first came from Ft. Wayne, Ind., where the brotherhood had remained active and intact. Steelton, Pa., another strong Macedonian bastion, followed the example of Ft. Wayne and began its own campaign. These appeals were heeded by the Macedonian groups in Indianapolis, Gary, Lansing, Detroit, Dayton, Springfield, Cincinnati and New York. Slowly but surely the fog was dissipated. Now as before, the sufferings for our brothers and sisters in Macedonia under Serbian and Greek rule became the main object of concern for these groups.
But their task was not easy. Beside waging a struggle against the enemy in their homeland, they had to fight vicious and misdirected opposition in their home base. They ganged up from all sides like hungry vultures ready for the kill. But nothing could discourage these sturdy and dedicated men who had been tortured in the Turkish dungeons in Bitola and Solun, tempered during the great insurrection in battle with undisciplined Bashi Bozouks, and at times forced to set their own homes on fire so that the enemy would not get hold of hidden arms, dynamite and ammunition. Is it any wonder then that these strong-willed individuals built the foundation of the MPO and the MACEDONIAN TRIBUNE which have lasted for over six [seven] decades?
It did not take long for the reactivated groups to move from words to action. By unanimous consent Ft. Wayne was chosen as the site for the first formative convention. It was called to order on Oct. 2, 1922, with a handful of delegates present. With few exceptions, most of the delegates were veterans of the Ilinden Insurrection in 1903.
The deliberation centered on the condition in Macedonia, where the Bulgarian schools and churches were forcibly closed and the teachers and priests arrested or exiled. Writing the by-laws took considerable time, but the product was a masterpiece of good statesmanship and political vision. It opened the doors for everyone born in Macedonia regardless of religion or national origin, who would willingly accept the main objective of the organization the creation of a free and independent Macedonia with equal rights and privileges for all its citizens. The unanimously accepted resolution stressed the main point of the by-laws and implored the great powers to assist in solving this problem.
Then came the election of officers. The results were as follows: Anastas Stephanoff of Ft. Wayne, president; Trayan Nickoloff of Indianapolis, vice-president Michael Nickoloff of Ft. Wayne, Secretary; Atanas Lebamoff of Ft Wayne, treasurer, and Pavel Angeloff of Chicago, advisor. Ft. Wayne was selected as the temporary headquarters of the Central Committee. Indianapolis was chosen as the site for the next annual convention.
The session ended in an atmosphere of enthusiasm and complete agreement among all delegates. No banquet followed the closing of the convention. The delegates gathered in one of our restaurants for a simple meal and prolonged friendly conversation.
The writer had worked for the MPO for more than 40 years. After retirement he continued to write articles for this newspaper until his death in 1989.