The Gotse Delchev Foundation (GDF) was established in 2001 in the spirit of the Macedonian hero who energized the Macedonian freedom movement that started in 1893.   Gotse Delchev was an educated man who worked for the union and betterment of the Macedonian people until he was assassinated in 1903.  Gotse Dechlev promoted love and mercy, not terror and force. He understood that nationality was merely the difference between flowers in a garden and his vision was to sustain the Macedonian heritage in the world community.
To that end, the Foundation’s mission is to sustain the vision of Gotse Delchev by supporting humanitarian and education services within the historical boundaries of Macedonia, and preserving our rich Macedonian heritage around the world. Our goals and objectives include:
Donate
Money contributed to the Foundation is not used for general MPO operations or administrative expenses.
Learn about our recent beneficiaries! 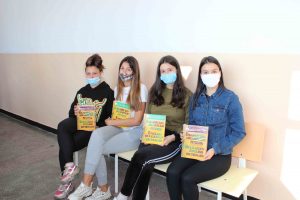 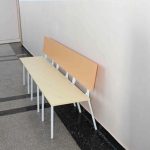 The GDF donated $1,300 to Neofit Rilski high school in Bansko Bulgaria which is at the foot of the Pirin Mountains in Pirin Macedonia.  The funds were used to buy 20 benches with backrests and English dictionaries and workbooks for students in grades 10 and 11.  The benches will help with the educational environment in the corridors and create a friendly atmosphere during their lunch and study groups.   The students were eating their lunches in the classroom along with their breaks and study groups.  Although they were able to go outside the school, it is difficult during the winter season.  We are so glad to have worked with the headmaster and senior English teacher to make this happen for the students at Neofit Rilski. 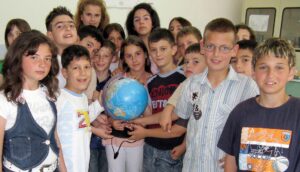 The GDF donated $3,000 to the Macedonian Schools Project, which has been active in the Ohrid-Struga area or several years. The schools are multi-cultural, offering classes in several languages.   Coordinating with schools and youth organizations in Macedonia since 2004, the project has installed 13 chalkboards and provided maps, globes, science equipment, flashcards, books, pens, computer equipment, first aid equipment, and sports equipment while building friendly relations with Americans.   “We plan to extend our efforts to assist in providing classroom-to-classroom opportunities between Macedonian and American teachers and students,” says Tom Lineham, Vancouver, Wash., project coordinator, who visits Macedonia each year and actively monitors the purchase and deployment of each donation. 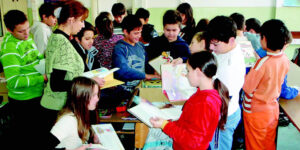 In December 2009, the GDF mailed more than 325 pounds of used books to schools in Probistop, Republic of Macedonia.  Students did not need textbooks, rather there was a need for interesting reading material to augment required English language classes and establish a library.   “The selection of reading materials was wonderful, attested to by the excitement among the students and teachers who had rarely, if ever, seen a child’s book written in English,” writes the man who started it all – US Peace Corps Volunteer Michael Erhartic.

In June 2006, the GDF donated a pulse oxymeter unit to the Institute for Respiratory Diseases in Children (IRDC) in Skopje, the capital of the Republic of North Macedonia.  The pulse oxymeter allows physicians at the Institute to safely monitor their young patients and thereby enabling them to administer general anesthesia to children undergoing treatment.  Before the donation of the pulse oxymeter unit, over 100 children a year had to endure the pain of a bronchoscopy without general anesthesia.  The MPO worked with Makedonka Dimitrova of the United States Agency for International Development (USAID) and Dr. Nada Uzonova of the IRDC to complete this project. 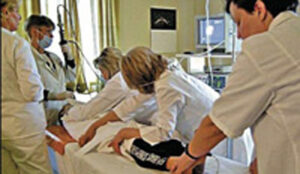 In October 2002, the MPO partnered with Providence Hospital of Southfield, Michigan to donate cardiac ultra sound equipment to the Clinic of Cardiology in Skopje, Macedonia.  This project brought together the MPO, Providence Hospital, Ascension Healthcare System, Hewlett Packard, the Macedonian Embassy to the United States of America, the Embassy of the United States of America to the Republic of North Macedonia, and the Macedonian Agency of Emigration, all of which worked together to make this donation and the transport of the equipment to Skopje possible.